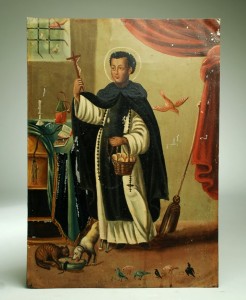 I am thankful I attend a parish in NYC that has all sorts of races and ethnicities and I very rarely hear any ignorant comments and if one or two slip by, I know it is not on purpose. This is why I was taken by surprise by the rampant racism found on Facebook and it’s awkward as heck to then see some of these same people at different parishes.

By the way, just in case you think I’m making this racist stuff up, a friend of mine recommended this book to me: Desegregating the Altar: The Josephites and the Struggle for Black Priests, 1871–1960.

So what makes the traditional Catholic more likely to be inflicted with this disease? It all comes to exposure.

So what is the solution? The solution is many conversations, but the conversations have to come from a good place. Ask questions that do no not have an agenda and use common sense.

Don’t ask a black person, “Why are black people always blaming white people for their mess?” An empowering question might be, “In your opinion, what role do whites or have whites played in the state of black communities today and how can everyone work together to change that?” Now you might personally feel that it’s time for black people to move on, but by asking the question that way you might get some insight. Facebook is a way to bridge the understanding gap but only if everyone is open-minded and sensitive to people’s perceived injuries.

Last thing. Stop using Catholicism to justify the denial of racial disparity. It exists. Catholics took part in the Civil Rights movement and traditional Catholics should have ZERO tolerance whatsoever for racists.

Read Racism Among Traditional Catholics on Facebook – Say It Isn’t So – Part II.

Further Reading
– Racial Justice and the Catholic Church by  Fr Bryan N. Massingale
– Who Are You? What is Your Faith?: America’s 21st Century Alt-Right and Catholic Social Doctrine
– Desegregating the Altar: The Josephites and the Struggle for Black Priests, 1871–1960